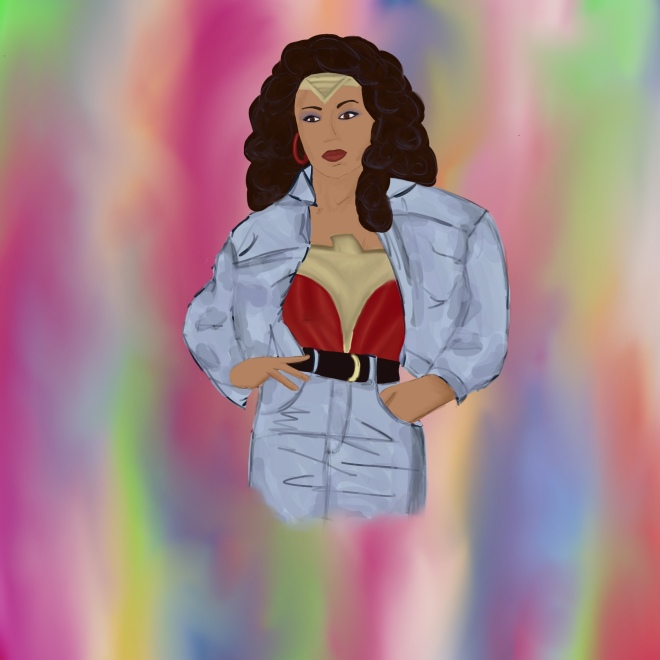 I meant to do this in an instagram post because I don’t really want to spent too much time on here talking about things I didn’t like. There are so many beautiful things out there that I adore and I feel like wouldn’t be fair to them. But alas, I wrote this and it’s too long for Instagram but it’s also important enough to me to not shorten it. So this one is somewhere in between an instagram short-format (as in short in comparison) and a whole blog post with pictures and everything.

This image is what I wanted from Wonder Woman 1984 – minus the horrible painting skills of course. As you know, I ADORED the first Wonder Woman movie (if you don’t know, there is a post on it of course), so of course I was hyped for the sequel. And I loved the colorful, golden-armored aesthetic of the promotion material. Which makes ist even harder for me to write this recap. Obviously, SPOILERS INCOMING.

Let’s start off with the basics: The movie is very long, has a lot of unnecessarily long (or just unnecessary) scenes but Hans Zimmer’s soundtrack is on point as always. There is a lot of superfluous kids-saving, a makeover scene that’s meant to be funny, an incredibly long flashback of the trimagical tournament of Themyscira and and the whole storyline to introduce the gold suit which is – again unnecessarily – worn for all of five minutes. The suit itself is also pretty but the wings are not made for flying and that’s my problem with it. There is also a very long and very improbable car chase involving tanks. I mean, I love Fast & Furious and that’s how I met Gal Gadot but come on.
Then there are the plotholes. They are mainly to do with the bad guy and his method of communication – going from having to touch to being able to broadcast his power because the broadcast technology is “touching particles”.

Also, Trevor is not only back and not freaked out but is also able to fly a plane that’s 60 years newer than what he knows. Oh and also, she very conveniently knows how to make stuff invisible all of a sudden. And then she learns to fly too. As in flying without a plane. Which is fine by me but is also a very long on screen process with no explanation and at some point, she uses the lasso of truth to swing between lightning bolts. yes, you read that right.
Besides the new powers and skills, Diana has not changed at all. As in, she’s not grown at all. She is stuck on her love for the very first man she ever saw and spent like five days with and I fee like it’s comical – and not in a good way – how her fashion sense is still “a lot of fabric but put a tight belt on it and it’ll look fabulous because it’s Gal Gadot”. It’s the 80s! They are bold and colorful and fun and I feel like the marketing promised that as well but she is stuck on beige and white and her beautiful flowing hair.

But enough with the negativity, I do have some things I liked. I liked how the Max character was portrayed even though the character arc didn’t make too much sense to me. And I loved Barbara from the beginning and right up until the cat lady thing. Kirsten Wiig did a beautiful job going from mousey but lovable to gorgeous and self-confident to stone cold bitch and looked great in all of the 80s wear! On that note, I also loved the fight scenes between her and Diana, even though they too were unnecessarily long but that’s a DC movie trademark at this point.

I also liked what the morale of the story was supposed to be, even though it was way too much on the nose. There is always cause and effect and a natural equilibrium of things. What I hated was that it all got reversed without explanation. The superpowered wishes came true (let’s say, more nukes on US-side) and then as an effect not directly caused by the superpower wish, a reaction happened (in this case, Russia attacking). With reversal of the wish, the US-nukes should’ve disappeared but not the ones Russia fired. It made no sense to me. Just as much as it didn’t make any sense to me that literally all people in the world were decent enough to revoke their wishes right away. There are going to be selfish assholes no matter what.

So, in conclusion, it was painful to watch both movies back to back and I’m really sad it turned out so badly and that not even the fashion was fun.